Minister’s court win intensifies fears for rule of law in Greece. Syriza accused of interfering in case and eroding independence of judicial system 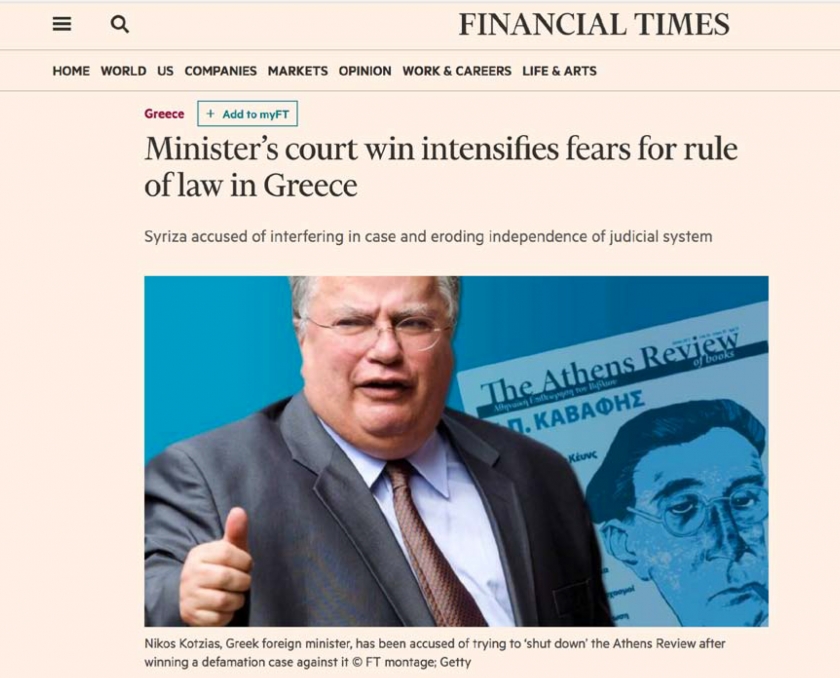 by: Kerin Hope in Athens

Fears for the independence of the Greek judicial system are mounting after the foreign minister won a court order freezing the bank accounts of a leading magazine over a reader’s letter describing him as a former “fanatical” Stalinist.

The ruling in favour of Nikos Kotzias has drawn sharp criticism from academics and public figures, who say it violates EU law on freedom of expression. It also highlights broader concern over perceived interference in the justice system by the leftwing Syriza government.

The concerns widened beyond Greece last week when senior eurozone officials warned the government that the continued prosecution of Andreas Georgiou, its former statistics chief, over claims he inflated the size of the country’s budget deficit in 2009, threatened to drive a wedge between Athens and its euro area creditors.

The affair comes as Brussels is already locked in stand-offs with Poland and Hungary over the rule of law that have raised questions over the EU’s ability to enforce the democratic standards at the core of the European project.

The Kotzias case centres on a reader’s letter published in the Athens Review of Books in 2010 that described the minister as having once been “the most extreme, fanatical, cruel and relentless communist of our generation, a true gauleiter [petty official] of Stalinism”.

The Supreme Court convicted Manolis and Maria Vasilakis, the magazine’s owners, on defamation charges and awarded Mr Kotzias €22,000 in damages. The court subsequently froze the bank accountsof the magazine and the couple following an application by Mr Kotzias.

This case goes beyond a personal dispute. The real enemy is the current government, which doesn’t believe in a democratic system of checks and balances Manolis Vasilakis, co-owner of the Athens Review

The move sparked controversy because it is almost unprecedented in Greece for defamation plaintiffs to try to collect damages once courts have cleared their reputations. Mr Vasilakis accused Mr Kotzias of wanting “to shut us down”.

The decision, which cannot be appealed against in the Greek courts, and Mr Kotzias’s response were made public late last month. Mr Vasilakis said he would appeal to the European Court of Human Rights.

Mr Kotzias, a former senior member of the Greek Communist party, which retains its Stalinist ideology, declined to comment.

The court issued a unanimous 5-0 verdict against the magazine after Penelope Zontanou, the Supreme Court rapporteur, who originally called for the case to be dismissed in 2016 after arguing that Mr Kotzias’s claim violated European human rights law and the Greek constitution, reversed her position. She gave no explanation for her change of mind.

“It’s unprecedented for a member of the Supreme Court to reverse themselves like this without a strong legal argument,” a top Greek judge said.

Mr Vasilakis said his dispute with the foreign minister reflected the “problematic state” of Greece’s judicial system. “This case goes beyond a personal dispute. The real enemy is the current government, which doesn’t believe in a democratic system of checks and balances,” he said.

The case is the latest to spark allegations of government interference in the judicial process.

Senior judges and prosecutors recently condemned a government proposal to abolish the Council of State, the highest administrative court, and replace it with a constitutional court. Nicholas Sakellariou, the council’s president, urged Athens “to stop undermining the work of justice”.

The Greek Union of Judges and Prosecutors, the judiciary’s professional body, said that “the independence of judges and prosecutors is the cornerstone of a democratic state” and accused the government of “systematically attempting to manipulate and fully control justice . . . so that it operates as a government mechanism”.

Dimitris Papangelopoulos, deputy justice minister, dismissed the charge, saying the union “has recently demonstrated an attitude that is strongly anti-government and also inward-looking . . . Does it not realise that the public’s trust in justice has declined sharply in recent years?”

The action against Mr Georgiou has also sparked concern. Last week an appeals court convicted him of violating his duties, overturning his acquittal last December on the same charges.

Xeni Dimitriou, whom the government recently appointed as Supreme Court prosecutor, has ordered the re-opening of another case in which Mr Georgiou had been acquitted.

The Greek judges and prosecutors union responded to Brussels’ criticism by saying: “The Greek judicial authorities are obliged to treat all citizens equally regardless of any special relationship they may have with an entity connected with the [European] Commission.”

“[The Syriza government] is going down the same road of extreme populism as Poland and Hungary, in this case to to offset the economic concessions Greece has made in successive bailouts,” said Thanos Veremis, emeritus professor of history at Athens university. “We don’t know where it’s going to end.”

Mr Kotzias, 66, is a divisive figure in Greece. The Germany-educated intellectual once co-authored a propaganda book with a top agent of the Stasi, the intelligence agency in East Germany.

In Athens Mr Kotzias tutored members of the communist youth movement, among them Alexis Tsipras, now the prime minister. After Syriza came to power in 2015 he become the party’s intellectual mentor.

He has denied accusations that he worked as a Stasi agent in Greece, arguing in a 2015 media interview that he was ordered by Greek and East German Communist party officials to “write things that were nonsense”.

Copyright The Financial Times Limited 2017. All rights reserved. You may share using our article tools. Please don't copy articles from FT.com and redistribute by email or post to the web.