Is Greek democracy in danger? 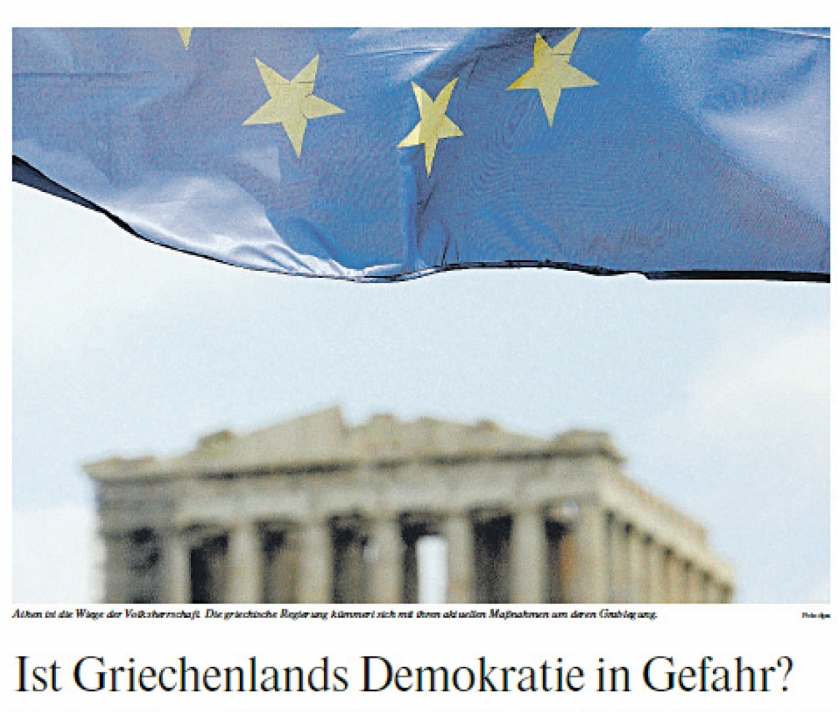 The prosecution against the "Athens Review of Books"

The "Athens Review of Books" (ARB), a widely appreciated monthly, could be forced to close down after a court decision for defamation of the Greek Foreign Minister Mr. N. Kotzias. The court imposed a heavy fine and ruled freezing of the journal’s bank accounts and impounding of the proceeds of its sales.

The minister had been relentlessly prosecuting the journal during the past three years, persisting throughout all three levels of the legal procedure. Pretext for his legal action arose from a reader’s letter published by the ARB in the section ‘Letters to the Editor’. The letter described Mr. Kotzias’s political career, first at the Greek Communist Party (GCP) and as one of its “most fanatical cadres”, supervising propaganda as member of the Central Committee, which earned him the nickname “the Greek Party’s Suslov.” The letter included a passage characterizing the minister as “the most extreme, fanatical, cruel, and relentless communist of our generation; a true Gauleiter of Stalinism.”

One of the numerous pieces of evidence the ARB submitted to the courts was the propagandist book Der autonome Intellekt, co-authored by Mr. Kotzias under the supervision of the “Head of Propaganda” of Honecker’s regime Manfred Buhr, a high ranking Stazi agent known by the code name “Rehbein” – “Deerfoot”. The book was published in 1976 by Akademie Verlag, the publishing house of the East German Communist Party.

Another piece of evidence submitted to the courts was the book in support of Jaruzelski’s dictatorship, authored by Mr. Kotzias and published in Greece in 1981 (Η Πολωνία κι εμείς: We Greeks and Poland). After becoming minister, on 9 February 2015, Der Spiegel asked Mr. Kotzias to comment this book, considering that the Jaruzelski regime had sent to prison Donald Tusk, now President of the European Council. Mr. K’s reply was: “Upon the orders of my party, [the Communist Party] I wrote things which were nonsense – for example, that thing about Poland.” In fact, among the nonsense he had written in the same book was the statement that “[…] imperialism […] awarded the Nobel prize to Czeslaw Milosz, an unknown refugee, […] in order to support the counter-revolution.”

In his petition to the Court competent for the case, Mr. K. claimed that the characterization “gauleiter of Stalinism” constitutes libel and asked for compensation, which the Court actually granted him. A passage of the Appeals Court’s decision, translated literally, reads as follows: «Even though it was proven that the plaintiff [N. Kotzias] was a founding member of the Greek Communist Party, the fact that he admired or advertised the above stated absolutist regime was not proven by any of the documents submitted by the defendants».

The Greek jurists who examined the judgment found various contradictions, inaccuracies and factual errors, in the above passage and elsewhere. Firstly, the decision of the Court, contradicting itself, accepted that Mr. Kotzias was a Communist and author of the above books, but ruled that neither his allegiance to the Party nor the documents submitted by the defense, including the above books (which were in fact duly submitted), proved “that he admired the above stated absolutist [sic] regime or advertised it». That was a deliberate inaccuracy, or a contradiction, or both; and whatever it was, the successive decisions of two high Courts repeated it.

These decisions, therefore, rejected the undeniable fact that the very “Head of Propaganda” of Honecker’s regime co-authored with Mr. K one of the above books! The Courts also denied that there was any proof of Mr. K. “admiring” Communism, despite two undeniable facts: that Mr. K. was a prominent member of the Communist Party, and that he did promote it in two books published in 1976 and 1981 – both facts proven by the defense and admitted by these same Court decisions – another contradiction.

The judgment also contained some gross factual errors, inaccuracies and omissions, which are obvious indications of partiality and flimsiness. It called Honecker’s totalitarian regime “absolutist”. It stated that Mr. Kotzias, now aged 66, was “a founding member of the Communist Party of Greece” founded almost a century ago, in 1924. Worst, the Court failed to examine the fact that Mr. Kotzias had lied by declaring that he was elected professor in the Universities of Oxford and Harvard; and he lied to the Court in order to overstate the damage which the supposed defamation had allegedly inflicted upon his personality.

The case was last reviewed by the Supreme Court. The member of the Court responsible for introducing the case advocated a verdict in favor of ARB; she even conceded that the decision of the Court of Appeals could be attacked for violating the Greek Constitution and the European Treaty of Human Rights. During the vote, however, the same person voted against her own report, failing to explain her change of opinion. Could it indicate fear of the Government’s wrath? Could it suggest compliance with the Government’s wishes or commands? Whatever the answer may be, the Supreme Court unanimously upheld the decision of the Court of Appeals and condemned ARB.

Eminent Greek jurists have strongly criticized the decisions of the Courts; and criticism in internationally known and influential newspapers or journals is on the rise. What will the touchy Minister’s reaction be? Will he hunt down foreign journalists too? Or will he perhaps prefer to do it before the Greek justice, hoping to find again some judges favorable to his cause? Mediocre judges exist in Greece, as they exist in all countries of the world. In normal times, however, and for the last two centuries, Greek justice functioned with dignity and efficiency, despite the scant means usually allocated to the judiciary by the executive. Unfortunately, these are not normal times.

The prosecution against ARB is not an isolated case

The prosecution against the "Athens Review of Books" (ARB) is not an isolated case. It is part of a new strategy, by which the Greek Government hopes to achieve two objectives: to control the Press and to subdue the Judiciary to the Executive. In the long term, such a strategy may well aim at impeding and finally abolishing the rule of law, in the move towards a parliamentary “democracy” that would essentially be an authoritarian regime – the examples of Poland and especially of Hungary are telling.

Indeed, the ARB case is not the only example of the Government’s effort to muzzle all opposition. An earlier case has been that of Andreas Georgiou, former head of the Hellenic Statistical Authority (ELSTAT), prosecuted for having supplied the European Union authorities, in 2010, with the real figures of Greece’s public debt. The infernal “logic” of the prosecution is that these allowed the European Union to impose upon Greece the first bail-out and its successors, which finally ruined the country’s economy. In other words, had Mr. Georgiou continued to send fake statistics to the E.U., the country would not now lay in ruin; and the Greek governments before and after 2010 are neither accountable nor responsible for the Greek debt, the bail-out and whatever happened since.

Another example of the Government’s far-reaching attempt to control the Press  has been the recent sale in public auction of permits for private television channels. In Parliament, the opposition Parties exposed the shortcomings of the auction, as well as the attempts to attribute permits to friends of the Government and to favor proposals backed by insufficient funds. Moreover, the Supreme Court ruled unconstitutional the law initially proposed by the Government and rejected it. However, the Government expressed its contemptuous disagreement for this specific ruling of the Court. From that point on, the various collective bodies of judges started issuing declarations protesting for the Government’s interfering in the realm of the Judiciary and disrespecting or ignoring its decisions.

By the middle of July 2017, the conflict reached a climax after a decision of the Council of State concerning a tax reform that enabled the Government to prosecute companies and individuals for cases of tax evasion dating back to more than five years. The Council of State ruled that the prescription for tax cases and tax offences in general (but for the legislated exceptions) is five years according to the general rules, and this could not change at will with new tax regulations and in particular when these have retrospective effect. Addressing the Prime Minister, the opposition parties kept asking what he intended to do after this decision. On 30 July 2017, Mr. Tsipras declared that in any event, "there would be other paths" which the Government could follow. He never clarified whether he meant that these 'paths' would circumvent justice or not. On another occasion, however, he said that he would not accept “institutional obstacles impeding (his) Government’s work”; evidently, the one major institution that could possibly be an obstacle to the Executive, is the Judiciary. The other is Parliament, of course; but strangely, nobody imagined that Mr. Tsipras may want to circumvent Parliament as well.

A different and telling example of the Government’s utter disrespect of the judiciary was the telephone discussions the Defense Minister P. Kammenos had with a convict for drug trafficking. Mr. Kammenos is leader of the far-Right Party participating in the Government coalition with Syriza. The minister has been accused since of encouraging the convict to expose a media tycoon whose newspapers and TV channel are opposed to the government, by claiming that he was implicated in drug traffic as well.

On 17 September, four months after the unanimous ruling by which the Supreme Court condemned the ARB, the Greek government published a decree promoting three of the five judges who had signed the ruling. One was promoted to be the new President of the Supreme Court, and the other two to be its new Vice-Presidents. Moreover, one of these new Vice-Presidents is the judge who had initially introduced the case to the Court advocating a verdict in favor of ARB, but changed her mind during the deliberation and finally voted against her own report. With this decree, the Greek government confirmed its determination to totally control the Judiciary and to impede the rule of law in Greece.

The opinion that freedom of speech and democracy in Greece are in danger has been expressed in four recent articles published successively in the major Athens newspaper To Vima, in the Financial Times and in Neue Zürcher Zeitung, an opinion shared by Nobel Prize winner Professor Pissarides.[1] If this is a correct assessment of the situation and the Greek Government does impede the rule of law, the European Union will be unable to impose the only sanction possible: to suspend Greece’s right to vote within the European institutions. A unanimous vote of all member States would be required for suspension; but the Greek government would be sure to have two vetoes in its favor, one coming from Poland, and one from Hungary.

[1] The four publications were (in chronological order):

“Kafka in Athens: The Hellenic Statistical Authority and the Athens Review of Books”, by Professors Costas Azariades, Yannis M. Ioannides, Pissarides, Christopher A. Pissarides, To Vima, 23.8.2017.